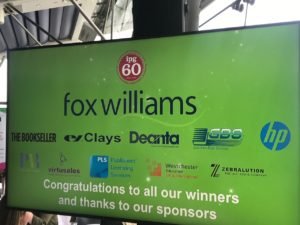 Even as we queued for the lifts to take us to the top of the Oxo Tower in central London, there was already a party atmosphere among the clusters of people waiting nearby. It was fantastic to hear old friends and colleagues greeting each other and discussing the joys of being back at in-person events after such a long break.

As the lift doors opened to reveal panoramic views over London, we were immediately hit with a buzz of excitement. We were greeted with a glass of fizz and a vibrant crowd; this year’s awards were extremely popular, with the IPG arranging extra seating for all the additional bookings.

We were delighted to bring the whole UK team together for the first time, with all seven members of the team plus three guests on our table. After a delicious three-course lunch, we settled in for the main event – fifteen awards celebrating independent publishing in the UK. The awards were hosted by radio presenter Elle Osili-Wood, who brought warmth and passion to her welcoming notes as she spoke of the many challenges faced – and overcome – by the industry over the past few years. 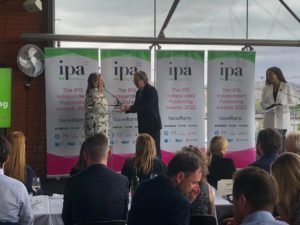 The awards covered a whole range of achievements, from children’s publishing to marketing, diversity to metadata. Our highlight was of course the Westchester Education Services ‘Education Publisher of the Year’, which was awarded to Bloomsbury Publishing by our CEO Tim Davies. Special mention also goes to Emerald Publishing, winner of the overall ‘Independent Publisher of the Year’ award.

It is fantastic to see in-person events returning and publishers and publishing services growing and thriving even in this difficult economy. We are very much looking forward to the next major awards event of 2022, which will be the British Book Awards at the end of May.

This website uses cookies to improve your experience while you navigate through the website. Out of these, the cookies that are categorized as necessary are stored on your browser as they are essential for the working of basic functionalities of the website. We also use third-party cookies that help us analyze and understand how you use this website. These cookies will be stored in your browser only with your consent. You also have the option to opt-out of these cookies. But opting out of some of these cookies may affect your browsing experience.
Necessary Always Enabled
Necessary cookies are absolutely essential for the website to function properly. This category only includes cookies that ensures basic functionalities and security features of the website. These cookies do not store any personal information.
Non-necessary
Any cookies that may not be particularly necessary for the website to function and is used specifically to collect user personal data via analytics, ads, other embedded contents are termed as non-necessary cookies. It is mandatory to procure user consent prior to running these cookies on your website.
SAVE & ACCEPT